The Belgrade Boat Show is attracting attention to two homemade products made from hobbies, but also, as their creators say, to show that we can make a good product and much cheaper than in the world. Inspired by social networks, young people from Jagodina and Kruševac made the first Serbian boat “Orca” and a water bicycle.

The Exhibited Ship – Smart House – “Orca” is a graduate work of two designers who have shown on the nautical fair that by project, quality of production and price we can compete with those with a long tradition.

The house, boat, camper, which gets electricity from solar panels and has a small draft of just 40 centimeters, is a hit of the Fair, although it is a prototype. In this house for six people, everything is adjusted to the touch screen, there are no classic switches, and the drive can be on a motor but also on an electric drive.

It is four times cheaper than the competition, and is made exclusively of domestic materials.

First orders come from domestic buyers, but all eyes are in the European Union, especially in countries that have channels like the Netherlands, where products such as this smart water house have a higher price. 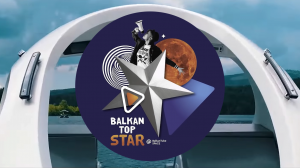